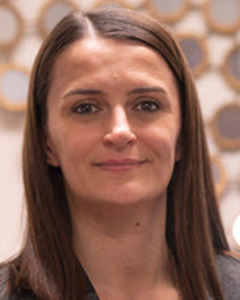 Professor Milenkovic has been a Notre Dame faculty member since 2010, after earning her Ph.D. degree in Computer Science from the University of California Irvine in the same year. She was promoted to an Associate Professor with tenure in 2016. She has been appointed a Frank M. Freimann Collegiate Associate Professor of Engineering in 2020.

The Milenkovic lab solves challenging problems in the fields of network science, graph algorithms, computational biology, scientific wellness, and social networks. Prof. Milenkovic won the prestigious 2015 NSF CAREER and 2016 Air Force Office of Scientific Research Young Investigator Program (AFOSR YIP) awards. Also, she has acted as the sole or lead Principal Investigator on five other awards by NSF or NIH and as a co-Investigator or Senior/Key Personnel on seven additional collaborative awards by NSF, NIH, or Google. She has published 47 journal papers (e.g., in Science, PNAS, Bioinformatics, or Nature’s Scientific Reports) and 16 conference papers (e.g., in the top tier ISMB/ECCB computational biology conference). Prof. Milenkovic's papers have attracted 3,500 citations; her i10-index is 39 and h-index is 28.

Prof. Milenkovic has been elected to the Board of Directors of the International Society for Computational Biology (ISCB) to represent the Society’s Communities of Special Interest (COSIs) during 2020-2023. Prof. Milenkovic has been an Associate Editor of IEEE/ACM TCBB since 2014 and of Nature's Scientific Reports since 2018. She has been an active organizer of the flagship Network Biology (NetBio) COSI meeting at ISMB/ECCB since 2017, and of the Great Lakes Bioinformatics Conference since 2015. Prof. Milenkovic is committed to increasing participation of women and diversity in Computer Science. For example, she has served as a member of Notre Dame’s University Committee on Women Faculty and Students since 2018. Also, she has organized outreach activities for middle school girls since 2012.

Prof. Milenkovic is committed to integrating research and education. For example, in addition to supervising a postdoctoral researcher, 10 Ph.D. students, and three M.Sc. students, she has also provided research supervision to 25 undergraduate students and a high school student. Seven of the undergraduates have continued onto Ph.D. programs at e.g., Stanford, MIT, Carnegie Mellon, or Brown University.