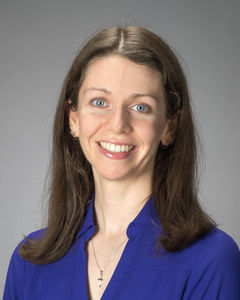 RNA structure is largely viewed as being single stranded or double stranded, although triple-stranded RNA structures were deduced to form in test tubes almost 60 years ago. Despite this early discovery, only a handful of RNA triple helices have been validated in eukaryotic cellular RNAs. The long-term goal of the Brown laboratory is to understand the cellular, biochemical, and structural roles of RNA triple helices using the MALAT1 triple helix as a model. This triple helix forms at the 3′ end of a cancer-promoting long noncoding RNA, MALAT1 (metastasis-associated lung adenocarcinoma transcript 1), and is required for the accumulation of MALAT1 in cells. We recently discovered that the MALAT1 triple helix interacts with METTL16 (methyltransferase-like protein 16), an RNA methyltransferase. The Brown laboratory is exploring several key questions. What is the cellular function of METTL16 and the METTL16-MALAT1 complex? Does METTL16 play a role in cancer? Does the METTL16-MALAT1 complex contribute to the molecular function of MALAT1 in cancer? To investigate these questions, we are using in vitro and cell-based biochemical methods. Ultimately, these mechanistic studies of the MALAT1 triple helix and METTL16 will advance our understanding of their roles in cancer.