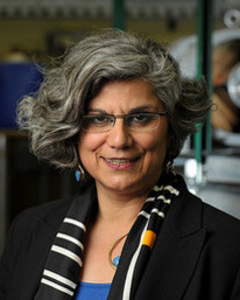 The Frank M. Freimann Professor of Physics at the University of Notre Dame

Isotopes for cancer therapy and immuno-diagnosis

Ani Aprahamian is a member of the Nuclear Science Advisory Committee as the US makes a long range plan for nuclear physics including the isotopes program. Small amounts of radioactive isotopes have become an important element of diagnosing and treating many types of cancer, heart disease, and other abnormalities in the body, but the failure of a European reactor and the shutdown of a Canadian reactor in late 2007 and early 2008 led to a global shortage, revealing the need for a U.S. strategic plan for production and development.

Aprahamian is an experimental nuclear physicist interested in various exploratory techniques and reactions to produce 99mTc as well as other radioactive isotopes for possible use in therapy and imaging. She is involved in an advisory role in several international and national research efforts to get a commercially viable production method for 99mTc.