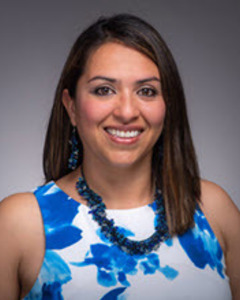 Dr. Flores-Mireles was appointed to the faculty of University of Notre Dame in 2018 as the Hawk Family Assistant Professor of the Department of Biological Sciences.

During her Postdoctoral training with Dr. Scott Hultgren and Dr. Michael Caparon at Washington University School of Medicine, she developed an interest in infectious diseases in the urinary tract. Her work understanding Enterococcus faecalis catheter-associated urinary tract infection (CAUTI) led her to discover that urinary catheterization in both mice and humans elicits bladder inflammation, resulting in the release of fibrinogen (Fg) into the bladder lumen which then becomes deposited onto the catheter. They found that the released Fg is critical for E. faecalis pathogenesis since Fg is used as a nutrient and exploits the Fg-coated catheters to form biofilms.

They unveiled that E. faecalis expresses a Fg-binding adhesin, EbpA, that tips the Ebp pilus, which binds directly to Fg via its N-terminal domain (EbpANTD) and this interaction is critical for the formation of catheter-associated biofilms. They were able to translate this work by showing that Enterococcus strains require Fg for catheter colonization in humans and that vaccination with EbpANTD protects against CAUTI. They also showed that passive immunization with anti-EbpANTD antibodies is effective both as a prophylactic and as a therapy for the reduction of bacterial titers. This therapy was also protective against a broad range of urinary tract, bloodstream, and GIT enterococcal clinical strains, which included E. faecalis, E. faecium, and VRE.