Taken by Wilhelm Roentgen in 1895, the first X-ray produced was of his wife’s hand.  Roentgen received the first Nobel Prize in physics for his work, but his discovery of X-ray beams also changed the medical profession far more than that simple black-and-white image might have suggested. The beams he used, higher in frequency than ultraviolet light but lower in frequency than gamma rays, revolutionized the medical profession, allowing physicians to see inside a patient’s body to more readily to diagnose disease and injury.

In short, Roentgen laid the foundation for diagnostic radiology. Within six months of his discovery, surgeons on the battlefield were using X-rays to locate bullets in wounded soldiers. Since that time they have continued to be used — for non-invasive imaging in biomedicine, non-destructive testing of materials, security screening, and more. The technology has advanced and so has the clarity and accuracy of the X-rays.

Today radiographic images, such as X-rays, mammograms, and computed tomography (CT), help detect diseases like cancer in its early stages when treatment can be most effective. However, it has all been in black-and-white. Even accounting for the remarkable advances in radiography and 3-D imaging since Roentgen, the difference between healthy tissue and abnormalities can be difficult to detect when an image is in shades of gray. Unfortunately, it can still be the difference between life and death. 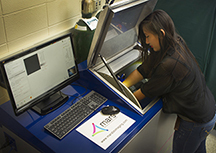 A new technology called spectral [color] computed tomography (spectral CT) is not only on the horizon, but it is also on the University of Notre Dame’s campus, where researchers are giving the phrase “in living color” a new meaning.

According to project leaders Ryan K. Roeder, associate professor of aerospace and mechanical engineering, and Tracy C. Vargo-Gogola, senior lecturer in biochemistry and molecular biology with Indiana University School of Medicine at South Bend and the Harper Cancer Research Institute, the spectral CT they are using — part of a collaboration between Notre Dame and MARS Bioimaging Ltd. (MBI) — is the first commercially-available preclinical system in the United States. Housed in the Notre Dame Integrated Imaging Facility (NDIIF), the MBI preclinical spectral CT scanner can detect up to eight X-ray energy channels simultaneously, allowing color assignment to specific molecular signatures for improved identification of abnormalities, such as tumors.  “The technology promises a transformation for biomedical imaging in general and cancer imaging in particular,” says Professor Bradley Smith, the Emil T. Hofman Professor of Chemistry and Biochemistry and director of the NDIIF.

While the scanner uses advanced X-ray detector technology [made possible by the Medipix3 detector chip developed at the CERN], it is aided by nanoparticle contrast agents that Roeder’s lab has created to “target” molecular signatures associated with cancer and other diseases. Individual contrast agents and tissue types can be identified and assigned a specific color, resulting in a more complete picture than ever realized.

Roeder, Vargo-Gogola, and their team are presently investigating spectral CT contrast agents for molecular imaging with support from the National Science Foundation. Their research is also being incorporated into a variety of educational programs for students engaging in STEM disciplines through NDnano and the Harper Cancer Research Institute. 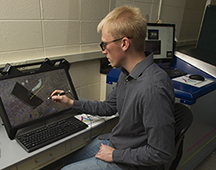 In addition, the researchers are forming a close collaboration with the Kelly Cares Foundation and the Saint Joseph Health System to develop more accurate breast cancer detection methods using molecular imaging for women with dense breast tissue using various molecular imaging approaches, including spectral CT. While these efforts focus on breast cancer, work with this new molecular X-ray scanner is promising for the detection and treatment of many types of cancers, including ovarian, colorectal, lung, and metastatic disease. - See more at: https://engineering.nd.edu/highlights/the-transformation-of-cancer-imaging-from-shades-of-gray-to-living-color#sthash.WeHCiw0v.xIPlOcub.dpuf