Dr. Jenifer Prosperi, a researcher at the Harper Cancer Research Institute, is studying how to treat breast cancers that evolve when a crucial tumor suppressor gene goes silent.

Over the past 15 years, the scientific community has come to understand that breast cancer is a monster with many faces.

Some cancers have one of three special indicator molecules (HER2, estrogen receptors and progesterone receptors) that can guide targeted anti-cancer treatments. But another set of breast cancers, the “triple-negative” types, lack those three indicator molecules that can guide treatment. And even now, the question remains: How can doctors better target and treat triple-negative cancers? And how can they keep up the treatment when breast cancers fight back?

Here, in this poorly-mapped corner of breast cancer research, Dr. Jenifer Prosperi is trying to answer both questions by looking in one place. 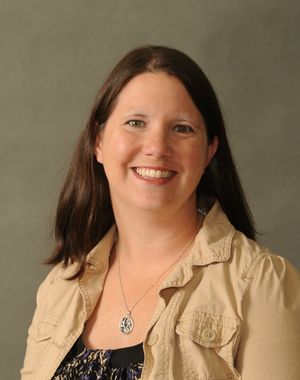 In her laboratory at the Harper Cancer Research Institute, Prosperi is studying a gene called APC, short for Adenomatous Polyposis Coli. Normally, APC regulates growth of rapidly-dividing healthy cells (like those of a growing embryo) by controlling DNA repair, making sure a dividing cell is facing the right direction and regulating crucial signaling pathways like the WNT pathway.

Prosperi, an assistant professor of biochemistry and molecular biology at the Indiana University School of Medicine in South Bend, focuses on APC’s role in a triple-negative subtype called metaplastic breast cancer. While breast cancer is the subject of intense focus in the scientific community, there have been comparatively few studies of APC in triple-negative subtypes.

But more often, APC goes totally silent. Cells mistakenly use a process called methylation to block APC from doing its job. It’s as if the cell has removed its reproductive brakes, launching itself into wild self-replication and cancerous growth.

Prosperi and her lab team—a post-doctoral researcher, a graduate student, a lab manager, and five undergraduates—are studying the breast tumors that emerge when APC stops working. Those tumors are not only extremely damaging but also hard to fight, because they learn to fight back against treatment.

“In breast cancer—as well as many other cancer types—there is a real problem with tumors developing a resistance to different therapeutic agents,” says Prosperi, who receives funding from Harper and the American Cancer Society and is applying for another grant from the Susan G. Komen Foundation.

Using a series of tests in both human and mouse cell lines, Prosperi and her team are determining how APC mutations can be road maps for treatment. Katia Fernandez Soto, a junior in Notre Dame’s College of Science, is dissecting how the loss of APC creates more cancer stem cells, which make tumors hardier and better at fighting changes.

“We’re trying to identify markers that tell the physicians what tumor is going to respond well versus poorly to any therapeutic agent,” Prosperi says. “Can we look at the patient’s tumor and say ‘You have this group of mutations, so I’m going to give you this drug’?”

Prosperi is also studying how a treatment could restore the function of APC without having to fix the gene itself.

“It’s proven to be difficult to restore those tumor suppressors,” she says. “And so you need to know what the failed suppressors are turning on, so that you have something to target.”

So in the absence of APC’s natural braking system, Prosperi is trying to manufacture a new one. The trick is to understand what different tumors will try, so doctors know which new braking system to apply. By re-creating the right braking systems, a drug could not only combat cancer but also reverse its resistance to other therapeutics.

In the process of research, other questions appear. Andjela Pehar, a senior science pre-professional major at Notre Dame who researches with Prosperi, is trying to figure out how tumors with malfunctioning APC interact with surrounding cells.

“If we isolate cells—specifically from a tumor—and do some molecular characterization from those tumor cells, our results are different than if we leave the whole tumor intact,” Prosperi says. “That suggests that there’s some interaction between the tumor and the extracellular matrix and microenvironment.”

As her research progresses, Prosperi is trying to understand how widespread APC malfunctions are in different types of breast cancer. It’s all still basic science—conducted in the lab, not in clinical trials—but the results are just as cutting-edge.

“We’ve been focusing on metaplastic cancer,” she says, “but are there other types of cancer that are really more susceptible to these mutations and these methylation events? That’s one of the big questions we have.”