The Pursuit of “Why?”

Dr. Siyuan Zhang investigates why and how tumors metastasize in the brain

The pursuit of “Why?” has taken Siyuan Zhang from his native China to Notre Dame to find answers in the battle against breast cancer. 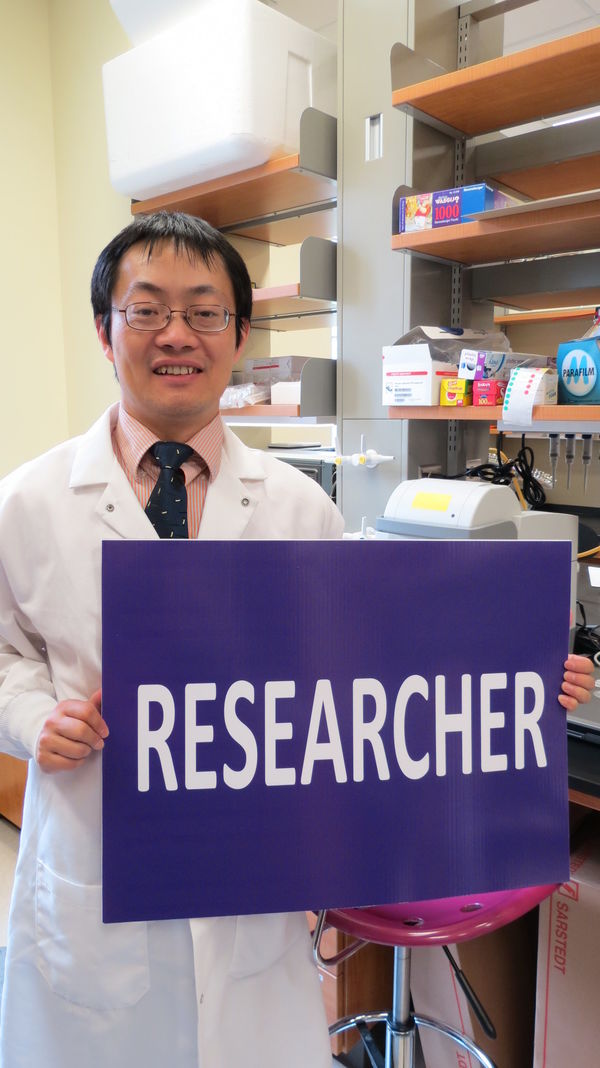 “I tell my students the best of the best have curious minds,” says Zhang, the Nancy Dee assistant professor of cancer research  at Notre Dame’s Mike and Josie Harper Cancer Research Institute. “The best of the best are always asking ‘Why?’”

In Zhang’s case, his “Whys?” focus on breast cancer and why some tumor cells manage to survive the initial treatments for the disease and are able to migrate to other organs, specifically the brain, where they metastasize and grow in a patient for another often deadlier battle.

Zhang, who received his medical degree at Peking University, a Ph.D at the University of Singapore and was a researcher at the prestigious University of Texas MD Anderson Cancer Center in Houston, has been searching his adult lifetime for such answers. His “Why?” helps to explain the name of his Harper Cancer Research Institute laboratory website – curiosityrover.org.

“Some of the very successful cancer researchers are MDs,” Zhang continues. “They see the patient every day and just keep asking why the treatment didn’t work. That’s when they tell themselves ‘I need to do something. I need to go back to the lab.’”

Zhang’s lab at Harper has received two grants: A Department of Defense Breakthrough Award for “Targeting Neuronal-like Metabolism of Metastatic Tumor Cells as a Novel Therapy for Breast Cancer” and a National Institutes of Health R01 grant for “Spatiotemporal Molecular Interrogation of Early Metastatic Evolution In Situ”

Often, if detected early enough and treatment started, the primary breast cancer tumor can be removed and the patient can receive radiation and chemotherapy treatment and be clinically cured. But in some cases, a small bit of the tumor can migrate undetected to another organ in the body where it can go adapt and expand.

“My particular focus is how the tumor cell metastasizes in the brain,” Zhang says. “The brain has this natural physiological barrier otherwise all toxins would get into our brain. It’s called a blood-brain barrier or BBB. It’s a very strong barrier that protects the brain from any toxin or unwanted stuff getting in easily.”

As Zhang explains, sometimes a cell of the original tumor will travel to the brain, pass through the barrier and begin to metastasize. Meanwhile, the chemotherapy drugs that functioned so well against the primary tumor are unable to penetrate the barrier and do the same. So the metastasized cell relentlessly begins to grow. It’s only after a patient begins to show signs of something being wrong – a missed step here, a dropped cup of coffee there – that a new diagnosis reveals a reoccurrence or relapse.

With the cooperative effort of engineering and computer scientists available at Notre Dame, Zhang’s lab at Harper has produced some interesting observations.

“Our hypothesis is that the cells may adapt to the new environment and try to use the energy source in the brain to survive,” says Zhang, who noted that it is as simple as he, a native of China, learning how to speak English in the United States.

“Based on our observations, our hypothesis is maybe we can target those (cancer) cells with neurological drugs that currently exist,” Zhang continues. “Drugs like those you use to treat autism, drugs you use to treat depression. Those are drugs that are designed to penetrate the blood-brain barrier. There are drugs targeted to those brain receptors because they have been designed to treat those neurological symptoms. The drugs have been designed to get past the blood-brain barrier and so we don’t have the chemo factor. We already have the drugs – we just need to expand the portfolio of the drugs so we can use them to fight cancer.”

In other words, fool the cell that has fooled its environment into thinking it belongs there.

“Maybe the concept is we don’t have to eliminate every single cancer cell,” Siyuan Zhang believes.

Maybe the answer to “Why?” is as simple as saying “Why not!”