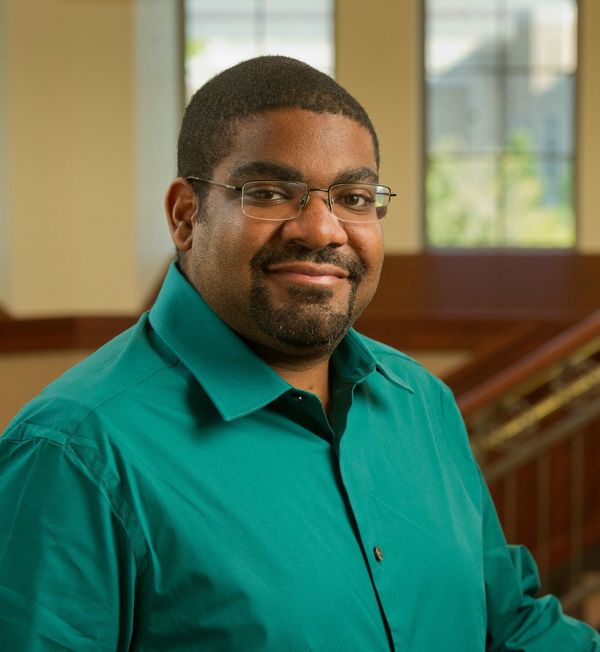 By studying how pancreatic cancer communicates with other cells, Dr. Reginald Hill is trying to find its weak spot—and prevent it from even occurring in the first place.

In his lab at the Harper Cancer Research Institute, Dr. Reginald Hill is trying to decipher a code.

Hill, a biology professor at the University of Notre Dame, is targeting the deadliest cancer known: pancreatic ductal adenocarcinoma.

From its earliest stages, pancreatic cancer bombards surrounding cells—collectively called the microenvironment—with messages telling them how to behave. The messages, contained in thousands of tiny packets called exosomes, effectively commandeer the microenvironment cells into protecting and providing for the cancer cells.

“The analogy I use is like a cell sending out text message to the other cells and surrounding environment letting them know what the situation is,” Hill says. “So if we can capture that text message, we can isolate the RNA from the inside and know to diagnose that there is cancer present in that person. We can hopefully diagnose this even in precursor stages.”

Through various research initiatives, Hill and his lab team are trying to decipher the code of these messages, which could explain the cancer’s mode of attack: how it signals its arrival, how it resists chemotherapy, how it recruits other cells to its cause. And with more time and research, that new scientific knowledge could lay the foundation for new tests and treatments to help people with pancreatic cancer. That’s why cracking the code is so important in preventing pancreatic cancer.

“What we’re looking at is coming up with a way to detect the cancer early, at a stage where we could actually help people who are susceptible to the disease or have a higher risk of contracting the disease,” Hill says.

Pancreatic cancer fervently recruits cells called fibroblasts, which help cancer cells grow by distributing growth factors and laying the groundwork for blood vessel development. As the cancer recruits more and more cells, the tumor grows rapidly. Unlike other cancers, the tumor has a relatively small proportion of cancer cells. The rest—as much as 80 to 90 percent—are fibroblasts, packed tight around the cancer like a life-sustaining shield.  Hill’s research has even shown that the fibroblasts help the cancer resist chemotherapy: As drugs bombard the tumor, the commandeered fibroblasts remain unaffected, and they even send messages to remaining cancer cells to help them survive.

Pancreatic cancer is deadly for a number of other reasons. For one, it’s difficult to find. Unlike prostate cancer and breast cancer, pancreatic cancer has no reliable markers that alert doctors to its presence. The pancreas is located deep within vital organs, making it hard to access with scanning equipment. And like any good spy, pancreatic cancer cloaks itself well. Patients often don’t feel any symptoms until the cancer spreads—and by then, it’s often too late for most treatments.

Through a grant from the Walther Cancer Research Foundation, Hill is partnering with fellow Notre Dame professors David Go and Hsueh-Chia Chang to create a test that will alert doctors if a patient has a high risk of pancreatic cancer before it even develops. The test detects the biological material from the pancreatic cancer’s “text messages,” which can preface the arrival of full-blown pancreatic cancer.

“That’s honestly one of the most exciting things that we’re doing right now, because it’s given us the opportunity to address a critical clinical need—a prognostic marker for early diagnosis—plus a very fundamental understanding of biological processes,” Hill says. “That’s the key in terms of how I try to focus my research: identifying it truly in the early stages in people that are most at risk.”

In all of his research endeavors, Hill has some help. A post-doctoral researcher, two graduate students and seven undergrads help him parse huge amounts of information from ongoing experiments. One graduate student, Jeni Gifford, works to find the targets of GRP78, a special protein that helps pancreatic cancer resist chemotherapy. (All cells have GRP78, but pancreatic cancer hijacks it as one more tool to help survive.)

Kate Richards, another graduate student, works to intercept and identify the signals that pancreatic cancer sends to other cells. Hill has argued that the huge population of fibroblasts—the sustaining shield around the cancer—help the cancer grow more stem cells.

“Stem cells are kind of the root of cancer,” Hill says. “They’re the root that the tumor uses to grow and adapt. If you kill the soil,” meaning the fibroblasts, “you kill the whole thing.”

Hill is also uniting other pancreatic cancer researchers against their common enemy. On November 15, Hill welcomed over 60 researchers to Harper for the Institute’s inaugural Pancreatic Cancer Awareness Symposium. Dr. Murray Korc, the co-director of the Tumor Microenvironment and Metastases research program at Indiana University’s Simon Cancer Center, was the keynote speaker, but the highlight may have been a talk from a pancreatic cancer survivor.

“It was really a great opportunity to not only share my research with people,” Hill says, “but more importantly to tell people some of the clinical challenges we face in pancreatic cancer research as well.”