In the fight against cancer, chemotherapy is a race against time. While chemotherapy kills the tumor, it also kills healthy tissue. So chemotherapy must do its job—eliminate cancerous growth 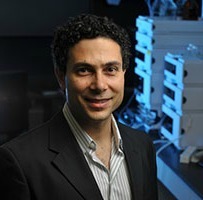 —before the drugs become too toxic for a patient to tolerate or do too much damage to a patient’s liver, kidneys and other organs. It’s a harsh battle, one that cancer patients and their families face all too often.  But if chemotherapy could be focused on only cancerous cells, leaving healthy cells largely untouched, chemotherapy treatments would deliver a significantly improved patient outcome.

Z. Başar Bilgiçer, a researcher at the Harper Cancer Research Institute, has found a way to do just that.

Bilgicer—he was born in Istanbul Turkey, by the way—is a professor in Notre Dame’s College of Science and College of Engineering who specializes in tiny structures called nanoparticles. Drawing on his experience in bioengineering, synthetic chemistry, and targeted drug delivery, Bilgicer has created nanoparticles that deliver chemo drugs straight to cancer cells with a minimal impact on healthy cells. His work has been widely recognized for its potential as an anti-cancer therapeutic, including the Leukemia Research Foundation and the Kelly Cares Foundation.

These cancer-fighting nanoparticles work a lot like tiny like seeker missiles: They target cancer cells, slip past immune system surveillance with stealth technology, and deliver their drug payloads with deadly effect. But in terms of how the nanoparticles are built, they’re more like crème-filled spherical donuts.

Nanoparticles find their way inside tumors by taking advantage of a flaw in the way tumors build themselves. As cancer cells grow and proliferate, they recruit cells that make up the walls of veins to create new vasculature to feed the tumor. Because this new vasculature is designed to be temporary (similar to the vasculature at sites of inflammation like bruises), the walls of blood vessels are not properly built. There are gaps between the cells, making the veins and arteries literally leaky. Nanoparticles in the bloodstream naturally collect in these leaky spots because of a nifty phenomenon called the EPR effect (short for enhanced permeability and retention).

Once the nanoparticles arrive at a tumor, they target cancer cells by taking advantage of another cancerous mutation. Cells have special receptors on their surfaces that bond with molecular “messages” from other cells, like tiny cellular antennae. When cells become cancerous and mutate, they sprout more receptors than normal—and that means they’re hyper-receptive to the right messages. Bilgicer leverages this attraction by covering nanoparticles with multiple copies of these messages in the form of special targeting elements, like sprinkles on a donut.

As the name implies, nanoparticles are tiny, even compared with human cells. Bilgicer and his lab team work on nanoparticles ranging in width from 200 nanometers to 10 nanometers (that’s 1/10,000th of the width of a human hair). For a sense of scale, imagine a 50-nanometer-wide particle is about the size of an average donut. The smallest particles, at only 10 nanometers wide, would be a tiny donut hole by comparison. The largest nanoparticle, at 200 nanometers wide, would be about the size of a car tire, except spherical. (And like a car tire, the surface layer would be relatively thin compared to the space inside).

There’s a reason for that size range: Small particles can slip through the tightly-packed cells of a tumor. “That’s the sweet spot, that size range,” Bilgicer says. “Below 10 nanometers, your kidneys filter out the molecules. Larger than 200 molecules, your immune system recognizes the particles as virus particles, and cleans them out.”

To avoid getting caught by the immune system, nanoparticles are made “stealthy” with a coating of polyethylene glycol (PEG, for short). But there’s a catch: too much stealth, and the particles can’t target cancer cells.

It’s a Goldilocks problem: Each of the nanoparticle’s dimensions—the number of targeting elements, the particle’s size, the amount of stealth coating—has to be just right. “For any modification that you make to the particles, it ends up affecting the particles’ effectiveness one way or another,” Bilgicer says. “Size is just one aspect.”

But the most important part of these targeted nanoparticles isn’t a particular characteristic—it’s the process of making them. From batch to batch, it’s hard to create nanoparticles that work exactly as intended. Sometimes, the donuts could emerge from the oven half-baked; other times, they might not have the right number of sprinkles.

This batch-to-batch variability has led some scientists to debate the effectiveness of targeted nanoparticles. Some have argued that nanoparticles work fine without targeting elements, since they congregate in the tumors’ leaky spots anyway. Again, Bilgicer has engineered a solution.

“Here’s what sets us apart: Everybody else makes the particle, and then attaches the targeting elements on,” he says. “We make all the components that assemble into the nanoparticle beforehand, and we purify everything close to 100 percent purity, then use the pure components to assemble the nanoparticle with high precision.”

Consequently, Bilgicer has virtually eliminated batch-to-batch variability. This means that his team can logically test variations in the nanoparticle build—trying to achieve that Goldilocks effect—without having to worry about whether the

“We’re screening for the optimal design characteristics for the nanoparticles using a very systematic approach,” he says. “We would test a set of nanoparticles, study the results of the experiment, make appropriate changes in the design, go back and do it again, look at the results, design the next system—and do it more intelligently. It’s an iterative process.”

In experiments (both in cell cultures and with mice), Bilgicer’s targeted nanoparticles have outperformed their non-targeted counterparts; both are vast improvements on standard chemotherapy. Bilgicer’s method has even attracted attention from the Nanoparticle Characterization Laboratory at the National Cancer Institute.

With different targeting elements, nanoparticles can be engineered to specifically target different kinds of cancers. “This is a platform technology that could be applied to any cancer,” Bilgicer says. Thanks to research funding from organizations such as the Kelly Cares Foundation and Leukemia Research Foundation, “we are almost there” with a treatment for multiple myeloma, and the team has made strides in a nanoparticle that targets HER2-positive breast cancer. He and his team are also working on targeting elements for prostate cancer and LHRH-positive ovarian cancer, which is notoriously difficult to treat. The nanoparticles are even effective against cerebral malaria, a scourge of the developing world.

In the future, it will even be possible to create a nanoparticle targeting system that is specially tuned to a patient’s unique form of cancer, maximizing the effectiveness of the particles. But for now, the goal is to conclusively prove the nanoparticles are ready to help patients beat cancer.

“My intention,” Bilgicer says, “is to identify a system that can be pushed into the clinic as soon as possible.”