The immune system plays an important part in the formation and progression of cancer cells. Orrin Belden, a senior science pre-professional major, has spent his past two years better understanding and contributing to the field of immunology. Orrin works for Dr. Brian Baker, Associate Dean for Research and Graduate Studies in the College of Science and Professor of Chemistry & Biochemistry, who's lab focuses on developing immunological therapies for cancer based on cellular immunity.

Orrin has engaged in a variety of experiences during his time as a cancer researcher. He began researching with Peter Velazquez, and transitioned to the Baker lab where he has been able to work on his project, which is titled "Engineering 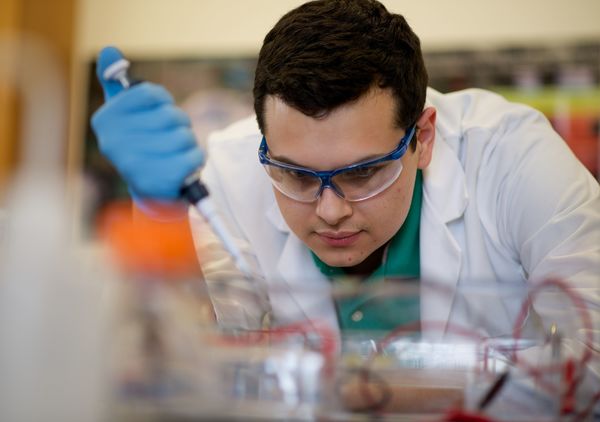 T cell receptors to optimize anti-tumor immunity." Although he is an undergraduate assistant, Orrin has the ability to design, plan, and conduct experiments under the guidance of Dr. Baker. Currently, he works on the cell culture experiments and characterizes the biological implications for experiments in the lab. Orrin uses a variety of technology for his project. He utilizes a thermocycler, a machine that changes the temperature of a solution to alter the nucleotide sequence of DNA. By altering the nucleotide sequence of DNA Orrin can determine the t-cell receptor's interaction a peptide complex important for cancer.

Not only has Orrin become skilled in Iaboratory techniques and research, he has been able to present and communicate his findings at a variety of conferences. When asked to describe his experiences at immunology conferences, he says "the conferences have helped provide further understanding of what is being worked on currently and also provide context for the work I am doing in the Baker lab." These experiences have helped Orrin improve his ability to research and think critically about the experiments he is conducting.

By becoming a proficient researcher, Orrin is directly shaping his future career in science. He is in the process of applying to medical schools, and plans to become a doctor that both researches and practices at an academic medical institution. By researching how the immune system functions, Orrin is already making strides towards becoming a proficient doctor. He has learned much about the nature of research and about current research techniques. Orrin's experience in cancer immunology has been perfect because he has been able to gain an understanding of how computational modeling leads cell cultures, and eventually result in a clinical trial. Being able to see his research in this way highlights how valuable undergraduate cancer research his. Concluding his experience, Orrin concludes, "I have grown close to the people in my lab and I completely enjoy the research I am doing. Immunotherapy is an exciting field of research and I look forward to seeing what else will become of research in this area."