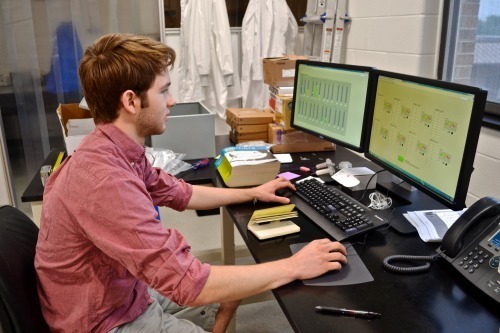 Maxwell Kennard is one of the four awarded students for HCRI-SURF. What makes him even more unique is that he was able to capture that opportunity just after his freshman year.  Now a rising sophomore at Notre Dame majoring in Mechanical Engineering and Japanese, Kennard was quick to show his interest in research of this complexity. He is advised by Dr. David Hoelzle, Department of Aerospace and Mechanical Engineering.

“I am very thankful for Dr. Hoelzle giving me the chance to work with him. I knew it was a challenge due to my age but I had to try, I really wanted to show what I could do. I work even harder now as I want to make sure that Dr. Hoelzle knows he didn’t waste his time on me,” Kennard said.

Dr. Hoelzle and Kennard are part of a project that works with a “lab-on-a-chip” methodology. This process facilitates multiple organ cultures to be “chambered” with uniquely addressable channels to modulate ranges of extrinsic stimuli. 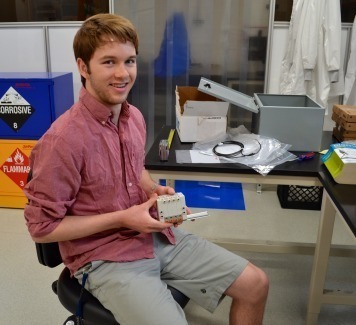 “A key goal is to determine whether calcium ion signaling is the underlying communication system that helps regulate cell responses based on a range of stimuli, from biochemical to mechanical and electrical,” Kennard said.

This summer, Kennard was tasked with the development of automation tools for novel organ culture systems.

Interested in robotics, Dr. Hoelzle’s lab gave Kennard a chance to work with on his passion in addition to systems integration.

“My job was to automate many of the processes involved in these experiments for novel organ cultures.  Traditionally all aspects of this type of research had to be separately and manually operated. The system we are creating has the opportunity to advance cancer research in a major way as the vastly improved control and regulation of stimuli should dramatically reduce the time and chance of error in evaluating the culture responses,” Kennard said.

His project should advance not only to Dr. Hoelzle’s research but also other laboratories as well. Kennard’s research is funded by the Harper Cancer Research Institute Summer Undergraduate Research Fellowship (HCRI-SURF).