Anil K. Sood, M.D., professor in the Departments of Gynecologic Oncology and Cancer Biology and co-director of the
Center for RNA Interference and Non-Coding RNA at the M. D. Anderson Cancer Center, will be the keynote speaker at Research Day Monday, April 15, 2013. 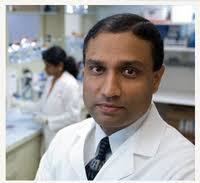 Sood will address the second annual gathering of the researchers and students whose work advances the mission of the Harper Cancer Research Institute. A poster contest and academic presentations also are planned.

Sood is also co-director of the multi-disciplinary Blanton-Davis Ovarian Cancer Research Program and Vice Chair for Translational Research in the Department of Gynecologic Oncology. Dr. Sood received his medical degree from the University of North Carolina, Chapel Hill, North Carolina.

He has received major recognition for his research accomplishments including the Hunter Award from the American Gynecological and Obstetrical Society and the Margaret Greenfield/Carmel Cohen Excellence in Ovarian Cancer Research Prize. He was recently elected to the American Society for Clinical Investigation, an honor society for physician-scientists. His research is focused in three main areas: 1) development of new strategies for in vivo siRNA delivery, 2) development of novel anti-vascular therapeutic approaches, and 3) effect of neuroendocrine stress hormones on ovarian cancer growth and progression.