Katia Fernandez Soto and Andjela Pehar, two science students researching in Dr. Jenifer Prosperi’s lab at the Harper Cancer Research Institute, are making strides in the quest to understand the role of the APC tumor-suppressor in breast cancer.

At the Harper Cancer Research Institute, Dr. Jenifer Prosperi is up against a formidable opponent: metaplastic breast cancer. 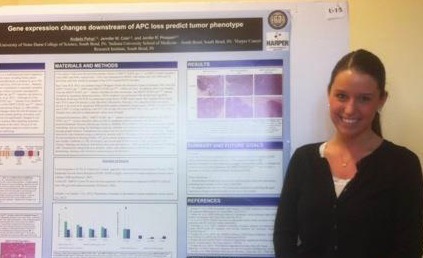 Since 2012, when Prosperi arrived at Harper, two Notre Dame undergraduates have researched cancer alongside her: junior Katia Fernandez Soto and senior Andjela Pehar.

Pehar and Fernandez Soto are science-preprofessional majors in the College of Science. And for both undergraduates, breast cancer research is personal.

“I was inspired by my mother’s history of cervical cancer and breast cancer to work specifically in breast cancer research,” says Fernandez Soto, whose family also has a history of stomach and colon cancer. “When [my mother] was in her twenties, doctors removed mammary cysts more than once. After she had my younger sister, she had to undergo a hysterectomy because doctors found signs for cancer in her uterus.”

For Pehar, a family history of cancer has fueled her desire to be a clinician.

“Upon coming to the U.S. as a war refugee in 1998, my mother was diagnosed with cervical cancer,” Pehar says. “Due to great care by her physicians, she ended up beating the disease. My mother’s paternal grandparents and two aunts had, however, passed away from cancer.”

Under Prosperi’s mentorship, Pehar and Fernandez Soto study the breast tumors that emerge when a tumor-suppressor gene called APC, short for adenomatous polyposis coli, either mutates or (more likely) goes silent, meaning it stops functioning altogether. APC loss can affect up to 70 percent of breast cancers in humans. After APC loss, the resulting breast cancer cells survive by cleverly adapting to chemotherapy treatment. Sometimes, cancer cells can adapt to multiple chemotherapies at the same time. 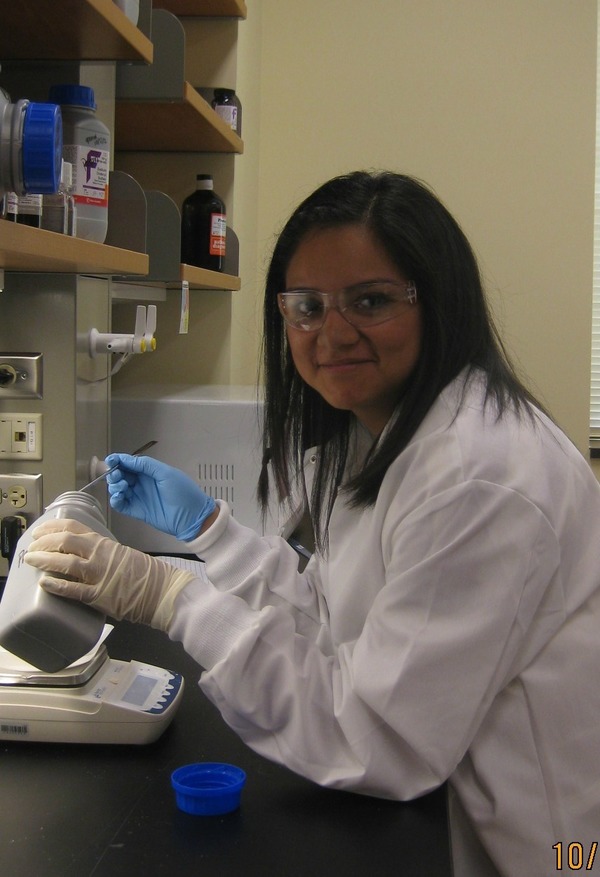 Fernandez Soto focuses on how APC loss transforms ordinary cells into hyper-adaptive cancer cells. In the lab, she tests how cells with normal APC respond to standard chemotherapy, and then does the same to cells lacking APC.

Sometimes, she says, cells without APC manage to ramp up production of proteins called ABC transporters. These ABC transporters are especially good at pumping chemotherapeutic drugs out of cells, so the cancer lives to fight another day.

Breast cancer’s second secret weapon for adaptation, Fernandez Soto has found, is an unusually large population of tumor-initiating cells, or cancer stem cells. Like wild cards in a poker game, cancer stem cells can evolve into any type of cell, albeit a cancerous type. With so many wild cards, the breast cancer can eventually evolve around almost any chemotherapy doctors throw at it.

“I was interested in looking at chemo resistance,” Prosperi says, “and she had actually done some literature searches and said, ‘Well, a lot of tumors that develop this resistance to chemotherapies tend to have a higher population of cancer stem cells.’”

Pehar is investigating another tumor survival tactic: the ability to recruit healthy cells to the tumor’s cause. Some tumors can interact with the surrounding healthy cells to grow and protect themselves from the body’s immune system response, like a shield.

Working with Prosperi, Pehar conducted an experiment to test if breast tumors recruit surrounding cells to survive. Pehar extracted some cancer cells from tumors and placed them in petri dishes. When the isolated cells started growing differently than cells left in the tumors, Pehar and Prosperi knew they had found evidence for a crucial mechanism in cancer survival.

“I think it’s actually been a really good project for her,” Prosperi says. “She’s a senior, she’s pre-med and she’s been driving the project, which has been really exciting.”

So Pehar is diving deeper: She’s looking at the different genetic changes between tumor cells and isolated cancer cells.

“Seeing firsthand how research can play a vital role in the eradication of such an awful disease has been major motivating factor for me,” Pehar says.

“My experience in the lab has been important to me,” Pehar says, “because it has truly transformed my view and understanding of the medical science and the way in which I see my future as a physician.”