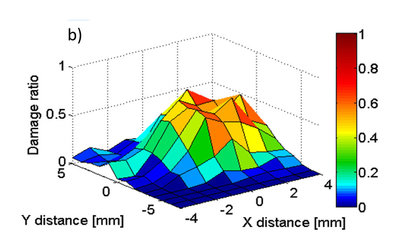 Abstract
In the present study, a nitrogen atmospheric pressure plasma jet (APPJ) was used for irradiation of oral cancer cells. Since cancer cells are very susceptible to plasma treatment, they can be used as a tool for detection of APPJ-effective areas, which extended much further than the visible part of the APPJ. An immunofluorescence assay was used for DNA damage identification, visualization and quantification. Thus, the effective damage area and damage level were determined and plotted as 3D images.