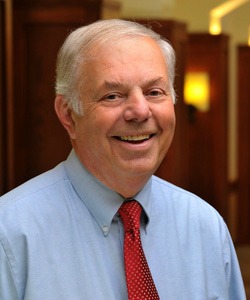 Research being presented at two international conferences this summer demonstrates that breast cancer survival improves when a patient’s depressive symptoms—a common occurrence among cancer patients— are detected and addressed.


The study, by Rudolph M. Navari, MD, Ph.D., FACP,  reports on the experiences of some 200 breast cancer patients five years after their initial diagnosis of early-stage breast cancer and the detection of depressive symptoms in the wake of their diagnosis. The research is being presented at the annual conference of the American Society of Clinical Oncologists in Chicago June 2 and at the annual meetings of the Multinational Association of Supportive Care in Berlin, Germany on June 29. Navari is an associate dean and director of Indiana University School of Medicine-South Bend and adjunct professor of chemistry and biochemistry at the University of Notre Dame.


Titled “Treatment of depressive symptoms in breast cancer patients undergoing adjuvant therapy,” the research demonstrates improved survival among those whose depressive symptoms were treated with an antidepressant, possibly because those patients were likely to successfully complete their cancer therapy.


The study began more than five years ago with some 350 women diagnosed with early-stage breast cancer who were to undergo adjuvant chemotherapy, radiation or hormonal treatment. Screened through a simple four-question test, about 200 were found to have depressive symptoms likely related to their cancer diagnosis. Half were administered an antidepressant, half were given a placebo.


Six months later, those who received the antidepressant had completed their treatment in greater numbers than those who had received the placebo. They also reported experiencing an improved quality of life and reduced symptoms of depression.


Now five years later, the cohort that received the antidepressant also has experienced survival in greater numbers than the placebo group, and in numbers considered statistically significant.


According to Navari, the results suggest that oncologists should be aware that the onset of treatment is often accompanied by depressive symptoms, and that identifying and treating those symptoms contributes significantly to patient quality of life and survival.


The study was funded by the Walther Cancer Foundation and by the Reich Family Endowment for the Care of the Whole Patient.

Originally published by Gail Hinchion Mancini at science.nd.edu on June 06, 2013.