Dr. Jeremiah Zartman, considered an Engineer/Biologist hybrid, has been at the University of Notre Dame for 3 1/2 years and is currently teaching Introduction to Bioengineering and Introduction to Cell Tissue. He is a perfect model for when describing the mission of the Harper Cancer Research Institute (HCRI). Zartman is a strong believer in the power of collaboration and the impact it has on cancer research. 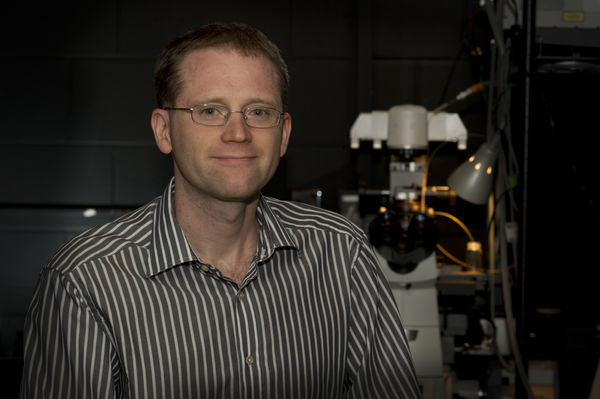 Dr.  Zartman and his lab are interested in the growth control of cells. Through model Drosophila (fruit flies), they focus on how cells make the decision to grow or not to grow while they’re in the tissue. Fruit flies have been used for research for many years due to the easily manipulated genetics. Many tumor suppressor genes have been discovered in flies. “We use cancer genetics which incorporates genetic model systems where we create cancer. Then we can feed the fruit fly with compounds (drugs) that affect the genetics inside and outside of the tumor. This will confirm whether the compound increases or decreases tumor growth. We use this as a screening process for researchers such as Dr. Brandon Ashfeld in Chemistry [at Notre Dame] to screen the therapies being produced. We also work with Dr. Siyuan Zhang at HCRI, we can help him quickly regulate the cancer genes by making them more or less abundant in the cell and see how that effects tumor growth. If it does effect tumor growth, this can lead to a new target for chemists to focus on creating a new drug.” Other active collaborations related to cancer research include interactions with Dr. David Hoelzle (AME), Dr. Pinar Zorlutuna (AME), Dr. Mark Alber and Zhiliang Xu (in ACMS) and Dr. Jeni Prosperi (Harper).

Zartman also conducts experiments in cell communications. He investigates how cells interact with one another. For example: if you have two groups of cells, growing at different rates, they will communicate with each other. One group of normal cells typically tries to eliminate the second group of abnormal cells. This is our body’s defensive mechanism against cells that might become cancerous. “We’re trying to learn if the cells are communicating with one another at large distances. If we can understand the communication between cells, we can learn how to manipulate their communication. When we create tumors, does that communication break down or change? We now have the tools to record conversations between cells.”

By creating bridges connecting faculty in various departments, Zartman is better able to create cancer within the larva, learn how cells are communicating when cancer is present, and are able to develop mathematical models for the mechanics and communications of the cells. “We need to collaborate to move science forward, we have to bring in the experts from multiple disciplines to fully define and conquer cancer.”