Diagnostic tools for cancer are usually costly and time consuming. For aggressive cancers, patients cannot afford to wait. Pancreatic cancer has one of the highest mortality rates of any cancer due to the lack of early detection methods.

Daniel Taller, an Aerospace and Mechanical Engineering PhD candidate, is working to develop a novel diagnostic technology for pancreatic cancer. 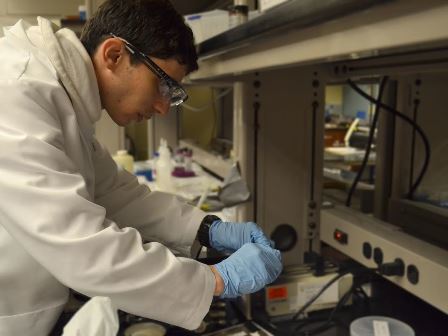 As an engineer, Taller can approach the diagnostic problem from a microfluidics standpoint. Microfluidics is an up-and-coming research field in cancer research because of its focus on fluids on the sub-millimeter scale. This allows the possibility of immediate diagnostic tests.

“There is great promise for developing technology at the intersection of engineering and biology to help save lives, and cancer diagnosis is a new frontier in this regard. My current project, funded by the Harper Cancer Research Institute, seeks to apply what I have learned to make a device which will aid in the study and early diagnosis of pancreatic cancer,” Taller said.

Taller’s research is a part of the Walther Engineering Novel Solutions to Cancer’s Challenges at the Inter-Disciplinary Interface (ENSCCII) Training Project. Funded by the generous support of the Walther Cancer Foundation, the ENSCCII Fellowship encourages scientists and engineers to work together for an end to cancer.

“Traditional methods for cancer diagnosis are often expensive and time consuming, requiring samples to be sent to a lab for extensive testing. I believe that we can circumvent these problems with intelligent engineering. The technology I envision will take in a small sample of fluid, such as blood, and provide the information necessary for disease diagnosis. This would allow patients to get tested earlier, more frequently, and at lower cost, saving lives in the process,” Taller said.

Taller’s device focuses on studying and analyzing exosomes, small bubble-like structures used for cell communication. The contents of exosomes also are believed to be crucial markers for disease progression.

“In the field of microfluidics, engineers have developed the tools to pump fluid through a device, lyse cells or exosomes, and do other tasks necessary for an inexpensive, point-of-care medical device. My work seeks to expand on microfluidic technology to design a practical device for patients and scientists,” Taller said.

“To accomplish this, I use something called Surface Acoustic Waves (SAW). Essentially, this involves applying pressure and electricity to the sample in order to break apart the exosomes,” Taller said. 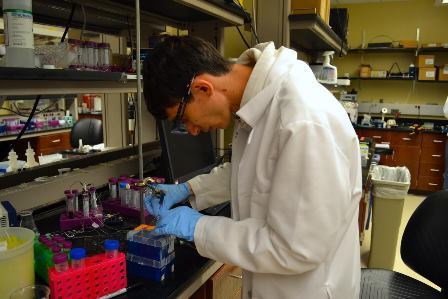 The third stage detects a particular strand of RNA that can bind to a membrane. This binding results in an electrical change, which can be measured to detect the amount of RNA present.

“If particular strands of RNA are upregulated or downregulated, this may indicate that the cells which released the exosomes are cancerous,” Taller said.

Right now, the three components of the device work separately, but Taller believes that the device has the potential to be mass produced, once combined into a single microfluidic device that could be used by physicians and scientists.