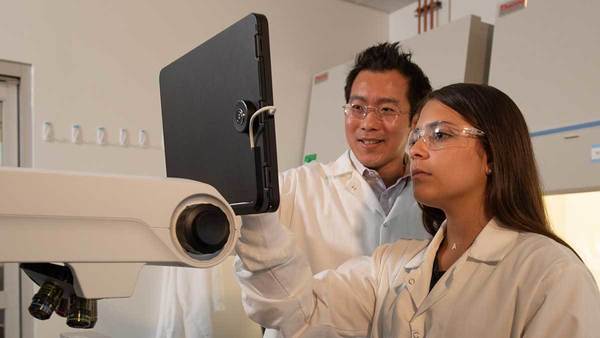 The cardiovascular system is a complex network of veins, arteries and capillaries. Within that network, lymphatic vessels are critical to the heart’s ability to heal in the event of a heart attack. When they’re functional, lymphatic vessels drain excess fluid that can cause swelling, and carry immune cells that can regulate inflammation and fight infection — each of which are a potential complication following a heart attack. And yet, lymphatic vessels have a history of being overlooked in cardiovascular research, becoming more prominent only in the last 10 years.

With funding from the American Heart Association, Donny Hanjaya-Putra, assistant professor in the Department of Aerospace and Mechanical Engineering and in the Bioengineering Graduate Program, as well as in the Department of Chemical and Biomolecular Engineering, will use biomaterials and stem cells to regenerate lymphatic vessels and study their potential for therapeutic applications.

“After a heart attack there is an influx of inflammatory cells that can cause swelling,” Hanjaya-Putra said. “What you have is a wound healing process. We propose that if we can regenerate the lymphatic vessel, we may be able to tip the balance of those inflammatory cells, drain excess fluid and promote healing of the heart.”

Earlier this year the American Heart Association reported heart disease as the No. 1 cause of death in the United States. The report also revealed an estimated 121.5 million adults — close to half the population of the United States — have some form of cardiovascular disease, such as high blood pressure.

For the study, Hanjaya-Putra will use adult and induced pluripotent stem cells, as well as biomaterials to create synthetic lymphatic vessels. If successful, he said, the bioengineered lymphatic vessels could be tested in similar applications to combat obesity and metabolic syndrome — draining fluid buildup in the gut caused by fatty diets — or reducing fluid and waste buildup in the brain, which has been linked to cognitive decline as seen in aging and Alzheimer’s disease.

Hanjaya-Putra received the American Heart Association’s 2019 Career Development Award, which will fund the research. He is an affiliated member of Notre Dame’s Advanced Diagnostics and Therapeutics initiative, the Center for Nano Science and Technology, the Harper Cancer Research Institute and the Center for Stem Cells and Regenerative Medicine.

Originally published by Jessica Sieff at news.nd.edu on September 18, 2019.