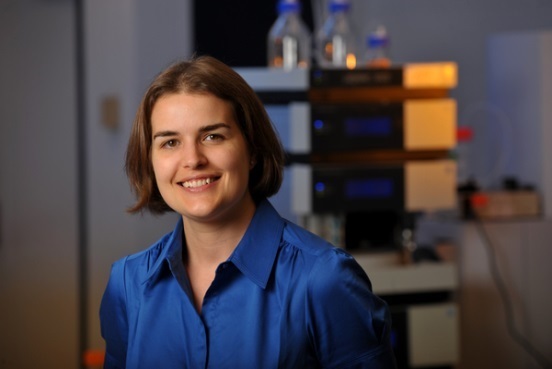 To say that Dr. Amanda Hummon is busy these days—even by Notre Dame standards of busy—would be an understatement. She insists otherwise, of course. But consider this: In addition to teaching classes to Notre Dame

undergraduates, Hummon is guiding no less than four major research projects this academic year on varying aspects of cancer research.

And even if her workload seems herculean, it’s a product of her own success. Hummon, the  Huisking Froundation, Inc., Assistant Professor of Chemistry and Biochemistry at the University of Notre Dame and a researcher at the Harper Cancer Research Institute, was recognized this summer with two prestigious grants for scientific research: the Early Career Award from the National Science Foundation, and a Research Project Grant (RO1) Award from the National Institutes of Health.

We spoke with Dr. Hummon about what she enjoys most about teaching students, her next proposal to NASA, and why it’s surprisingly difficult to find “Breaking Bad” clips suitable for showing in chemistry class.

HCRI: Congratulations on receiving the NSF Early Career Award this summer. What research are you pursuing with your grant?

AH: We’re taking these three-dimensional cell cultures—which are mimics of little human tumors—and we’re applying drugs to the cultures to see how well drugs are able to penetrate inside.

A lot of times, people will develop new drugs that may work if applied directly to cancer cells, but the drug may not get to the cells inside the tumor if they’re far away from a blood vessel. Using a technique called mass spectrometry, my laboratory has developed a way to evaluate how well that will work.

We’re also working in collaboration with Bradley Smith, a Notre Dame chemistry professor. His lab synthesizes apoptotic imaging probes. If you give one of those—his lab has a library of 25—to someone with cancer, the probes help figure out where the tumor is. We can again use our approach, using mass spectrometry, to test those compounds and find out if they can make it to the tumor. The Smith lab was testing these compounds in rodents, but can now do preliminary testing with us in the 3D cultures before trying them in animals. Eventually these probes could be used in humans.

This will make testing compounds more rapid. Our method is faster, higher through-put, you don’t have to kill a whole lot of animals, and you’re actually using human cells. That’s the big advantage of what we’re doing.

How is that research progressing so far?

We just published a paper a few weeks ago, really applying the methodology as a proof of concept. We’re just now starting to get to the exciting part: We’re going to start working with unknown drug compounds, to start using it in more of a testing fashion. And with the imaging probes, we’re working our way through the library, testing each one, and figuring out which ones work better than others.

Congratulations, too, on the (RO1) Award. What kind of research are you conducting through that grant?

It’s a joint grant with Professor Dana Spence at Michigan State University. The Spence Lab has developed a 3-D-printed device that enables you to give very specific doses of drugs to cells. We started putting our 3-D cell cultures in this device, and we can very accurately deliver a specific dose of a therapeutic compound—or a combination of compounds—to the cell culture, and see how the drug affects the 3-D culture and how the 3-D culture affects the drug. We then apply the imaging mass spectrometry to look and see what happens to the tumor mimics after they’ve been exposed to the chemotherapy.

Yes. When people visit the clinic for chemo, it can be up to a two-day procedure in which they’re getting three different drugs in different time windows. Because our approach is high-throughput, we test many more of these permutations, faster. For example, instead of just combining Drugs A, B, and C, we can test very readily A, B, and D, and then C, D, and F. Now we can test so many more combinations, so much faster. This is a really effective way to screen new chemotherapies and combinations of chemotherapies. And we can test them on any kind of cancer. Any kind of tumor mimic you can grow, we can test chemotherapy on it. It’s just become a much faster way to screen chemotherapy drugs.

And help bridge the gap between the lab and the clinic.

How has that research been going?

Over the last six months, we’ve spent a lot of time making sure the 3-D cell cultures are compatible with that device. It’s a lot of quality control at the moment. I’ve hired three new graduate students this year to work on the projects—two for this project, and one for the previous project.

When we last spoke, you mentioned another project about low-level radiation. What’s the focus there?

If you go outside in the sun and you don’t have sunscreen on, what are some of the molecular changes that will occur? If you fly at really high altitudes, you’re exposed to higher levels of radiation. Pilots, flight attendants, people who fly a lot—they’ll have higher radiation exposure over the course of their lifetime. Is that an actual cancer risk for them or not?

This summer, we wrote a big proposal to NASA to study the changes that occur to astronauts when they exit the atmosphere and go into outer space.

How did the NASA proposal turn out?

We were not funded, but they really liked it. They actually suggested a couple tweaks to the proposal, and we revised it and we will re-submit it in June. Fingers crossed on that one. Usually it takes a few go-arounds to get funded. I was pretty pleased with that.

We also talked about another project to predict recurrence of colon cancer. What inspired that?

Fundamentally, I got into this line of research because I wanted to have a better understanding of colorectal cancer. I’ve lost members of my immediate family to colorectal cancer. After losing someone, I researched it and found that there’s so much we didn’t know. That, for me, is the driving force: If we understand this better, we can make better recommendations and treatments to help people.

What’s the nature of the project?

Statistics professor Steven Buechler and I have a project where we look at genomic profiles for patients who have had stage II colorectal cancer and who have had their tumor removed. In those cases, the doctor has to make a decision whether or not to recommend chemotherapy for these patients. It’s not terribly obvious what the right decision is, because you don’t want someone to have chemotherapy unnecessarily.

So Steven and I have been working for the last four years and we have discovered a panel of genes that can predict whether or not someone’s cancer will relapse. We can look at their gene expression levels and figure out whether or not their cancer will come back. That project has been very meaningful. We’re in the process of patenting the panels and trying to get the whole thing commercialized. That could have a real, huge impact on patients with colorectal cancer.

How has that project progressed? What are the difficulties with that kind of research?

It can be challenging to find patients who fit the criteria for the study. We have to look at patients five years out from their original cancer date, because we’re looking at whether or not they’ve relapsed.

But we’ve had an exciting development with that project, even if it’s more logistical than scientific. The Marshfield Clinic in Wisconsin has some 200 samples in their repository, and we are now collaborating with them. We’re using parts of all of those samples to test our genomic panels to see how well they perform. And if they perform well with 200 samples, then we will apply to establish clinical trials.

You also taught general chemistry for non-science majors in the fall. What inspired that?

I requested this teaching assignment because I think we need to do a better job teaching non-scientists to appreciate science as well. I wondered, going in, whether the non-scientists would be into the class. But they really loved the class. It was a lot of fun.

I taught the course from the perspective of how some molecules have changed the course of human history. We looked at penicillin, and how developing antibiotics has completely changed mankind. We also looked at things like isoprene—the fact that you can have tires or various other uses of plastics.

The most fun part of the class was having the students analyze a scientific problem that’s occurring in the world today—one of the groups talked about fracking—and I asked them how it’s being portrayed publicly compared with how it’s being portrayed. And they really got into the assignment. That was lots of fun. The goal: When they hear scientific topics talked about in the future, they’ll analyze them in a critical manner.

We also blew up things a lot. In one lecture, we talked about the Hindenburg—why did the Hindenburg blow up? Obviously hydrogen is a lot more reactive than helium. And to demonstrate that principle, we blew up a balloon filled with hydrogen and then showed how a balloon filled with helium didn’t have the same combustion. We talked about how, if someone had appreciated the chemistry a little moreand insisted on using helium, the Hindenburg outcome would be different.

Did you talk about “Breaking Bad”?

We did! I couldn’t resist bringing up “Breaking Bad.” We had a class featuring the periodic table, and all the slides are “Breaking Bad”-themed.

When I teach, I lecture for 20 minutes intervals and then show clips of YouTube videos. I love to break lectures up with little fun clips. But it’s very hard with “Breaking Bad” if the character Jesse is in the scene, because he swears so frequently that it’s usually not appropriate to show in class. I can get away with “CSI” clips, because nobody swears. But the language is the difficulty with “Breaking Bad.”

This is a lot of projects to work on, even by Notre Dame standards. Stepping back from it all, has it been more than you expected? Has it been workable?

All the projects we are now working on have evolved organically. Either projects evolved in a different direction from what I originally had in mind, or someone proposed a collaboration. That’s what has surprised me the most. All the research with 3-D cell cultures—I didn’t plan on doing it six years ago. But that part of the lab has taken off the fastest. In a lot of ways, it’s a good thing, because you need to have flexibility and work with the science, not against it.

And what’s the best part of it all?

Working with students. It’s fun to see how there are parts of research in their education that they grab onto and take off with. In some ways, one of the most rewarding parts of the job is whenever students come up with their ideas on their own. If they’re working on a project long enough, they come to you and say they want to expand their project in a new direction. It’s hard to say how cool that is, as you see them making the transition from student to scientist. That’s the most fun part of this job.