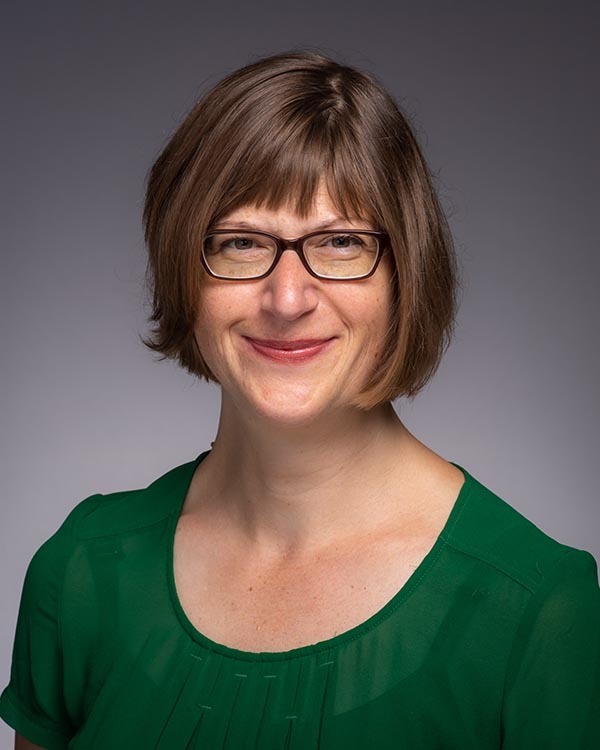 Rebecca Whelan, associate professor of chemistry and biochemistry, is excited to be a new faculty member at Notre Dame, where she can now do research with the aid of graduate students and postdoctoral researchers.

Whelan previously was a faculty member at Oberlin College, in Ohio, which does not offer graduate degrees. Therefore, all of her research in the field of bioanalytical chemistry – with one focus on developing new ways of testing for the presence of proteins in ovarian cancer cells that healthy cells don’t contain – was completed with the aid of undergraduate students only.

“I feel very, very fortunate to have been recruited at Notre Dame,” Whelan said. “I’m smiling. So far I’ve interacted with both graduate students and undergraduate students, and this is a remarkable community of learners; I am really impressed.”

Bioanalytical chemistry entails making measurements on samples that come from living beings, and Whelan searches for biomarkers  – those proteins made by cancer cells – of ovarian cancer. Because of its vague symptoms, ovarian cancer doesn’t usually get diagnosed until later stages, and therefore has a low five-year survival rate. If ovarian cancer could be detected earlier, many more lives would be saved. “So it’s a question of whether we can develop a blood test that gives us a way to detect early-stage ovarian cancer,” she said.

Protein biomarkers for cancer can be detected in the bloodstream using molecules called aptamers. They are single strands of DNA that have been “unzipped” from the other strand, and they’re useful because they try to stabilize by folding in upon themselves, leaving many small pockets and surfaces that may have the ability to bind to a protein in a cancer cell. Any of the million billion different pieces, synthesized by a company in Iowa, may be the “right” aptamer for the cancer cell, and Whelan’s lab uses an in-vitro process to find the right aptamer for the job. It’s like looking for a needle in a haystack.

“One way to think about it is evolution in a test tube,” she said. Applications for the research can span beyond cancer, and one of Whelan’s students is considering how to use the technique for diabetes.

Affiliated with the Harper Cancer Research Institute and Advanced Diagnostics and Therapeutics, Whelan also collaborates with the University of Wisconsin and faculty in that university’s obstetrics and gynecology department.

In her spare time while at Oberlin, Whelan enjoyed volunteering as an on-air personality for the campus radio station. It’s a role she hopes to take on soon at Notre Dame.

Whelan graduated with bachelors degrees in chemistry and English from Lawrence University in Wisconsin, and earned her doctorate in chemistry from Stanford. She worked as a postdoctoral researcher at the University of Michigan before being hired as an assistant professor at Oberlin College. She earned tenure there in 2011 and served as chair of the chemistry and biochemistry department from 2014 to 2018.

Originally published by Deanna Csomo McCool at science.nd.edu on April 03, 2019.