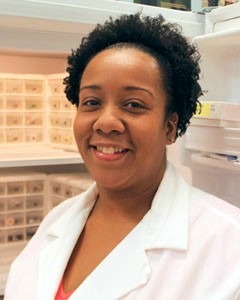 Certainly, Notre Dame is not lacking in success stories-- but once in a while, the University witnesses truly impressive researchers rise from humble backgrounds to become dynamic and successful leaders in their respective fields. One such success story, Dr. Tyvette Hilliard, recently received a highly competitive 5-year K01 Research Career Development award from the NIH/NCI, and is the first-ever K01 awardee from the University of Notre Dame. In the last five years as a postdoctoral fellow, Hilliard has made her name known within academic circles, particularly at the Harper Cancer Research Institute. Her project, titled “The Impact of Maternal Obesity on the Reprogramming of the Metastatic Microenvironment,” will investigate how maternal obesity may influence the susceptibility of offspring to ovarian cancer metastasis. Dr. Sharon Stack, Hilliard’s mentor and the Director of Harper Cancer Research Institute, responded that the institute is happy to retain this highly promising young investigator as she begins her track record of independent federal funding here at Notre Dame.

Hilliard has come a long way from a first-generation college student from the South Side of Chicago to the woman she is today. “I was not exposed to the idea of pursuing higher education in my neighborhood,” she said. “…Instead, I was faced with violence and gang activity. I vowed that I would not succumb to the standard in my neighborhood and worked hard to get good grades in elementary school so I could be accepted into Whitney Young High School, one of the top college preparatory schools in Chicago.” When Hilliard faced difficulties, early during her undergraduate years, and her advisor suggested she could not handle the rigorous schedule of a biology major, she refused to give up. She reflected: “When I realized the alternative to not succeeding in college, I decided nothing is too difficult for me to handle. For that reason, I rejected my advisor’s advice and eventually double majored in biology and chemistry.” Hilliard went on to graduate with honors, holding two Bachelor of Science degrees in biology and chemistry.

Hilliard’s path to her current success is one full of surprises: “I knew I wanted to become a doctor, specifically an obstetrician/ gynecologist, at a very young age. I was exposed to this profession by watching the Cosby Show. I did my research and knew this is exactly what I wanted to do. After undergraduate study, I was taking a year off to work in the lab and study for the MCAT. Little did I know my plan would change in a matter of weeks. My PI at the time ran the NSF Illinois Louis Stokes Alliance for Minority Participation Bridge to the Doctorate program, and advised me there was one spot open at University of Illinois-Chicago and before I knew it I had started graduate school. Ten years later, I am in my second postdoctoral fellowship studying ovarian cancer. I may not have become on OB/GYN, but I am still studying women's health,” she answered.

Hilliard has not forgotten those who inspired and helped her along the way, and strives to provide the same support to the next generation of scientific researchers. The undergraduate professors at Chicago State University saw great potential in her, and were instrumental in “pulling it out of her and making her see it.” She said, “I've also had great PI's at Chicago State University (LeRoy Jones), University of Illinois Chicago (Joanna Burdette) and here at Notre Dame (Sharon Stack) as well as great lab mates in every lab from undergrad to the present, and a supportive family, friends, and church family.” Hilliard is a role model for her little cousins, nieces, and nephew who look up to her, and she tries to lead by example and let them know their education is important. 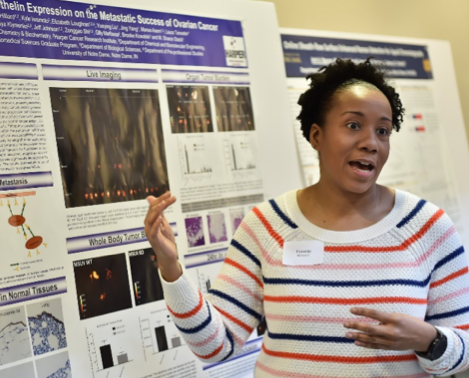 Outstanding accomplishments aside, what stands out about Hilliard is her easygoing, thoughtful, and amiable disposition. When asked about her future plans, she responds: “I plan to be a successful independent researcher providing impactful contributions in the ovarian cancer field, as well as mentoring future scientists.”