A Tissue Bank on the Rise

“During a massive snow storm a couple years ago I received a phone call about consenting a patient.  It was a young woman, newlywed, who just found out she had cancer. She was told that she had to have an immediate hysterectomy and that she would never be able to have children. It is times like these I return to my car and cry,” says Toni Page-Mayberry, Tissue Biorepository Consent Coordinator at the Harper Cancer Research Institute (HCRI), as she reflects on one of her most memorable patients. In this interview, Page-Mayberry describes her role at the Institute and what it means to donate to the tissue bank.

The Process
Page-Mayberry begins by connecting with local Surgical Coordinators and receives a list of names of those scheduled for surgery with a confirmed cancer diagnosis or a suspicion of cancer. She travels to hospitals to meet patients who are being admitted into surgery for a biopsy.  “I get to the hospital right when the patient is arriving. I may be the first person they see. I tell patients I work at HCRI and that their doctor participates in our tissue bank program. Then I explain to them the process.” 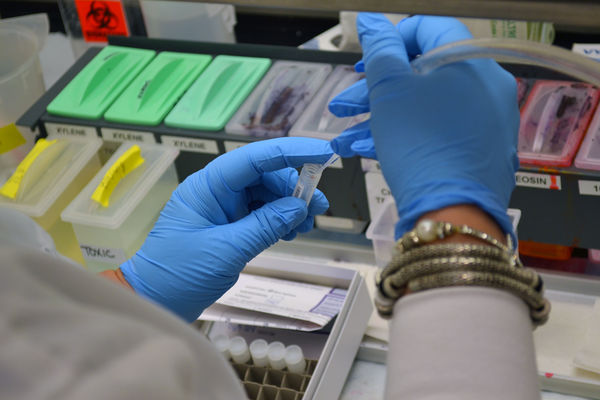 Tissue is removed from the patient to be tested for abnormalities including cancer.  The surgery is usually triggered by an overgrowth of cells in a specific area of the body.  These cells are removed and examined by a pathologist, who uses a variety of tools to determine whether the tissue is benign or malignant (cancerous).  In the absence of a tissue bank, the leftover tissue that is not needed for diagnosis is disposed of as medical waste. However, patients in our community can choose to actively participate in biomedical research by consenting to donate their excess tissue to the HCRI Tissue Biorepository (tissue bank).  Once patient consent is obtained, the tissue is completely de-identified to remove any information that can link the specimen to a specific patient, and processed for storage at ultra-low temperature in a secure facility.  The de-identified tissues are then made available to researchers who have received proper approval to use this resource.  Access to human tissue is essential for many aspects of cancer research, from designing new early diagnosis strategies to developing new drugs.

How did you learn about the Harper Cancer Research Institute?

Page-Mayberry first met Sharon Stack, director of the Harper Cancer Research Institute, while at a cancer survivor luncheon. “I was impressed with how she began crying while talking about her father.” Dr. Stack’s father passed away from lung cancer while she was in college. “I’ve never met a researcher who was so passionate about their job. She had everyone in the room in tears.”

During that time, Page-Mayberry was teaching classes in Chemistry, Medical Technology, Anatomy and Physiology at National College in South Bend.  She is educated in Medical Terminology, Chemistry and Behavioral Science and holds a master’s degree in Health Care Administration.

“After the luncheon, I spoke to Sharon about my work from a scientific standpoint. Then I had her come to National College to speak to my classes about the Harper Cancer Research Institute and their mission.”

Soon after, Page-Mayberry had earned a position on the HCRI team as the Tissue Bank Consent Coordinator.

Can you describe the changes in the tissue bank since you arrived?

“There were only four surgeons participating in the tissue bank when I was hired. Now we have eighteen. My job is not only to protect the patients but get more surgeons on board. I had to knock down many doors which takes time and patience.” One of the main challenges in this position is coordinating with the surgeons and their medical teams to help patients understand the purpose to the tissue bank. “I need the surgeons to understand that there is no extra work for them and I need the patients to understand that it is safe and how their donation can make a huge impact. One of these donations can lead to a cure.”  The surgeons don’t receive any compensation for participating in the tissue bank program, “They do this out of the goodness of their hearts. They want to find a cure just as badly as we do.” 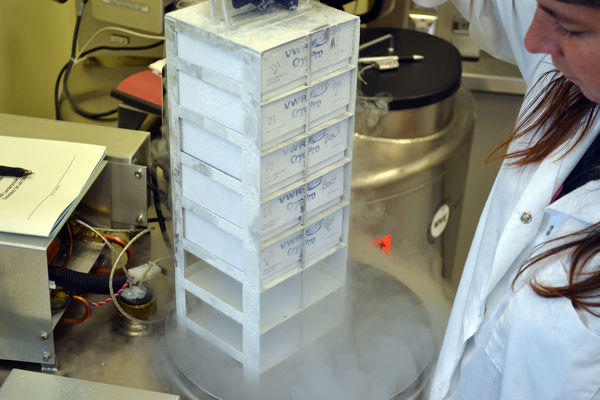 What are your hopes for the future of the tissue bank?

“Get more surgeons on board with our program of course! I would love to expand to other hospitals in the Michiana area. Along with expansion, I hope in the future we can begin collecting blood samples as well as tissue.”

Why do you do what you do?

Page-Mayberry has many reasons to be angry. For starters, she is a 14-year breast cancer survivor. But this disease made its mark on her beginning with the death of her mother from breast cancer.  Then “My husband, Jay, was diagnosed with melanoma two years after we were married. Jay was cancer free for a while but then it came back and metastasized. I was mad.”

Jay passed away from metastatic melanoma in 2015. For Page-Mayberry, this job is her way of fighting back. “When consenting patients, it’s not just a name for me. I get to know these people. I form relationships with them. I sit with the families in the waiting room and talk with them.” She continues, “All cases are difficult to deal with but some are more emotionally straining than others. It’s a roller coaster of emotions- I can be sad, I can be happy. But either way it’s a very rewarding job.”

With questions regarding the tissue bank, please contact Toni Page-Mayberry at: tpagemay@nd.edu.