At the Harper Cancer Research Institute, Dr. Karen Cowden Dahl is leading research on ARID3B, a mysterious gene that could hold promise for identifying more aggressive forms of ovarian cancer.

Standing at a microscope in her Harper Hall laboratory, Dr. Karen Cowden Dahl is scanning through a petri dish filled with cancer cells that could represent a major step forward in ovarian cancer research. 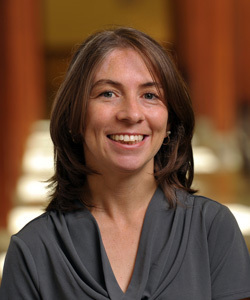 Ovarian cancer is especially cruel because it is so hard to detect. While other types of cancer like breast cancer have reliable indicators that allow for early detection, ovarian cancer is hard to catch in its early stages.

But Cowden Dahl has found a biological marker that could be the long sought-after warning flag for ovarian cancer: ARID3B, a ubiquitous but poorly-understood transcription factor gene that acts like a switchboard operator by turning genes on and off in normal cells.

ARID3B is an essential component of development—embryos can’t survive without it—but in cases of ovarian cancer, ARID3B appears far more frequently than normal. Somehow, the gene gets its wires crossed and cells start dividing uncontrollably.

Funded through grants from the National Institutes of Health and the Ovarian Cancer Research Fund, Cowden Dahl aims to test how cancer cells react to ARID3B in different environments—and to apply those experimental findings to understand why some ovarian cancers develop resistance to chemotherapy.

“Ovarian cancer is one of the leading causes of cancer death in women,” says Cowden Dahl, a concurrent professor at the Indiana University School of Medicine and the University of Notre Dame. “It’s very aggressive, and 75 percent of women who have ovarian cancer have advanced disease because it’s so hard to detect and the symptoms are very vague.”

As a result, almost all ovarian cancer patients receive the same treatment: surgery and a cocktail of carboplatin and Taxol, two chemotherapy drugs with nasty side effects like nerve damage, kidney damage, hair loss and immune system breakdown. The treatment is an imprecise, scorched-earth approach, but it represents the best available option—and that’s the problem, says Cowden Dahl.

“Most people respond very well to treatment, but most will relapse,” she says. “Once they relapse, they never survive. [Their cancer becomes] resistant to the therapy. To me, that’s a major problem. We’re not well-suited to cure people with these treatments. We can stop [the cancer] for a while, but if it learns, there’s no stopping it.”

Cowden Dahl’s research begins with infecting cancer cells—all grown from cells harvested from different cancer patients—with varying amounts of ARID3B. Magnified on the microscope’s monitor, most of the cancer cells are roundish with a tightly-defined nucleus, like eggs cooked sunny side up. But about 10 percent of the cells are deformed, as if the eggs had been splattered against a wall. These are mesenchymal cells; Cowden Dahl has nicknamed them “spider cells” or “scorpion cells” because of their bizarrely splayed tendrils. The deformation results from an extreme reaction to excess amounts of injected ARID3B. Because of the dramatic shape-shifting, she says, mesenchymal cells lose their ability to behave like normal ovarian cells, which normally clump together like cobblestones. 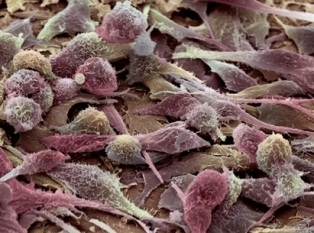 The exact connection between ARID3B and the deformation is still unknown. ARID3B  “does have some effect on cell shape and the cells’ ability to stick to things,” Cowden Dahl says, “but we haven’t figured out why that is yet.”

It’s a familiar theme in cancer research: Each correctly placed puzzle piece seems to open up even more gaps in the puzzle. Her lab team recently completed an experiment comparing two forms of ARID3B, short form and long form, when injected into ovarian cancer in mice. Cowden Dahl had predicted that the short form would cause cancer while the long form would not because  in cultures, the long form has caused cell death. To her surprise, the exact opposite occurred: Long-form ARID3B triggered big tumors, while the short-form version seemed ineffective.

“We think it comes down to the concentration issue,” she says. “If you have a lot of it in there, it causes cell death. But if you have a medium amount, it causes tumor growth.”

Though the progress has been slow, it represents a giant leap. When Cowden Dahl first began her ovarian cancer research as a postdoctoral student at the University of New Mexico, scientists hardly understood ARID3B’s role in ovarian cancer.

Now in her own lab with a support team of three undergraduates, a rotation Ph.D. student, and three postdoctoral fellows, Cowden Dahl is at the frontier of ovarian cancer research—even if the progress can feel ponderous.

“To me, what makes biology so interesting—and so hard—is that we don’t know,” she says.